Note: None of the names of those mentioned in this story have been changed in order to protect their privacy.

Of late, I’ve received inquiries from readers regarding Sola’s origins. Some of the details are not known to us, but I’ll give it my best shot.

We learned in April of 2004 (by word of mouth) of a three month old yellow Labrador Retriever, sitting in a cage on a farm in the Northeast Kingdom of Vermont. We don’t like cages. I tracked down the owner by phone, requested directions from her, and Mrs. Author, Nigel and I made the two hour drive to the aforementioned farm. Our journey took us from interstate to two lane blacktop, eventually leading to a dirt road winding away from civilization, drawing us nearer to one of the most bizarre spectacles I’ve witnessed.

We wound our way up a steep dirt driveway, and upon cresting the hill found ourselves at what appeared to be a typical Vermont farm, perched atop a cold windswept mountain. Two lovely yellow Labs greeted us as we stepped out of our dusty SUV. They were rather amicable, approaching for a scratch, retreating to guide us toward the farmhouse…coming back again for another rub. We knocked on the door, and there she was.

No, not Sola. Bernice.

Bernice (the farmer’s wife) met us at the door and invited us to come in. We wiped our shoes in the mudroom, hung our coats, and walked directly in to…the 1960’s. Faux wood wall panels surrounded us, our feet cushioned by grass-green shag carpet. Gold flecked counter tops drew our attention to the kitchen. Gaudy, gold filigree framed flea market quality artwork in the living room screamed out for attention. This was full-on, no holds barred tacky of the sort that makes my mannequin wielding neighbor look like Martha Stewart.

Only two items betrayed the 60’s decor theme. The first was a dusty computer perched on a hideous desk in the corner; the other: the terrific hairstyle Bernice was modeling. It was perfectly preserved from 1983, frosting included. And it was big. As we sat down to speak with her I was fairly sure I heard Culture Club music emanating from her hair. She lit the longest, thinnest cigarette I have ever seen, struggling to draw a drag from it. Wrinkles around her mouth suggested that she had planted a straw in the ground and spent the last ten years trying to suck her way to China.

Bernice told us her version of Sola’s story. According to her, the lovely pair of Labs that greeted us upon our arrival were the parents of the puppy that she had “out back.” This comforted us; our experience with them was very positive. They were good natured, bright-eyed, hardy farm stock Labs. According to Bernice, the pup she had was one of a litter of fifteen, and she’d been unsuccessful at finding a home for this last little one. We were also assured that the pup had spent much time in the house and was completely housebroken.

Author: Our interest piqued, we asked if we could have a visit with the little one. Bernice led us out back to a solitary pen containing one round, lonely little female Lab. We took her out, picked her up, cooed and caressed her. She snuggled in close, kissing Mrs. Author. It was evident that she was starved for attention, and did not want to leave the warmth of our arms to return to solitary confinement. She never had to: we were sold. 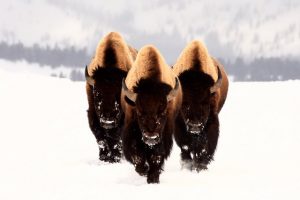 Back in the funhouse, we chatted with Bernice while she prepared all pertinent paperwork. I stood at the kitchen sink, staring out the window in an attempt to avoid coming down with a headache from the glare of Bernice’s press-on nails. A Buffalo wandered by in the pasture. I mentioned this to Mrs. Author, who joined me for a look. Bernice explained that they had been raising “buffaloes” for a few years, and that they were quite tasty. She then had us review the papers for the puppy we were taking home.

The papers were unfamiliar to me, issued by the CKC, or Continental Kennel Club. I asked Bernice why she did not register her pups with the AKC. Major mistake. She turned three shades of purple and went on a ten minute rant about “them AKC people.” It was explained to us that the AKC had issued a ten year suspension to Bernice (and her hair) for not reporting the deaths of puppies from the litters she bred. We understood that some puppies do not survive, but Bernice felt it necessary to tell us that some of the pups wandered in to the pasture and were kicked by the “buffaloes.”

Mrs. Author and I exchanged glances, horrified. A quick visual scan of the walls confirmed my suspicions: no Harvard degree to be found. Instead, Elvis stared back at me from his velvet canvas, and even he had a look on his face that said “Get me the hell outa here bubba.” We thanked Bernice, grabbed our paperwork and ran for the truck. The farmer waved to us as we peeled out of the driveway, pedal to the floor, Sola in Mrs. Author’s arms.

We made the trip home in record time. Sola (we had decided on the name prior to meeting her) never showed any sign of distress at having to leave the farm or her parents behind. We found this odd, but assumed that she was tired. In retrospect, I think she was happy to escape Bernice, her hair, and the buffaloes.

Once inside we stripped off our winter clothes (April in Vermont is still winter) and let Sola explore the house, with Nigel close behind, observing her every move. And then the floodgates opened. In her first twenty-four hours with us Sola urinated in our house no less than twenty-three times, just shy of a one whiz per hour average. She did not miss the 24/24 mark for lack of effort, but was instead waylaid by a one hour nap.

Sola: I told you Bernice lied.

Author: We were very much aware of that, thank you very much. The next hours, days and weeks were spent swearing, screaming, and jumping up and down on bunched up paper towels in every room of the house. Nigel stayed on the couch, safe from the flood waters. Bags of trash surrounded us, overflowing with yellow paper towels and empty wrappers.

Did we lose it at times? Hell yes we did. There were days that I would have paid every dime I could scrounge out of the cars and couches to have someone haul Sola away. Truth be told, we came close one day. But Mrs. Author and I are not quitters when it comes to critters. Weeks and months passed, Sola slowly gained bladder control, Nigel eventually took off his life preserver. The sun came out, and the carpets dried. We stopped torturing our Bernice voodoo doll.

Would I change anything if I had a chance to go back in time? I would have loved to have snapped some pics of the funhouse, the hair, the buffaloes. But I would not give up Sola for the world. She flooded the house, ate furniture (more on that in another post), and chewed on Nigel relentlessly. She tested our patience beyond reason. She also brought Mrs. Author and I together as parents, eventually made peace with and befriended Nigel, and she stole my heart.

I wouldn’t trade Sola for all of the tea in China, which may very well be lodged in Bernice’s straw as I type this.

My Neighbor is a Dork