We have so much catching up to do! There will be plenty of time to fill in the gaps, but here is the short version.

Sola: “They have been cheating!”

I must proclaim – I did not choose the name. Mrs. Author is responsible for that one.

I just paid for her.

She was a gift to Mrs. Author. A little unwanted runt from the same neck of the woods Sola came from. She was the cutest little peanut, cold and lonely in her pen; and we were instant suckers. Her parents were beautiful, and it shows. But in case you missed it, look at her picture again. Truffles came with a nifty surprise, a bum leg. Angular Limb Deformity, or ALD. Google ALD and you’ll find that it can be pretty rough. It has been.

Months ago (less than two days after she came home with us) we noticed that her leg was swollen and appeared slightly misshapen. Many vet trips and X-Rays and specialist consultations later we were forced to decide between three options:

1. Return her to the breeder to be put down and “replaced.”

3. Spend ridiculous amounts of money to have a surgeon from Ohio State University fly in to join our local specialist in a tag team surgery that would leave Truffles looking like this: 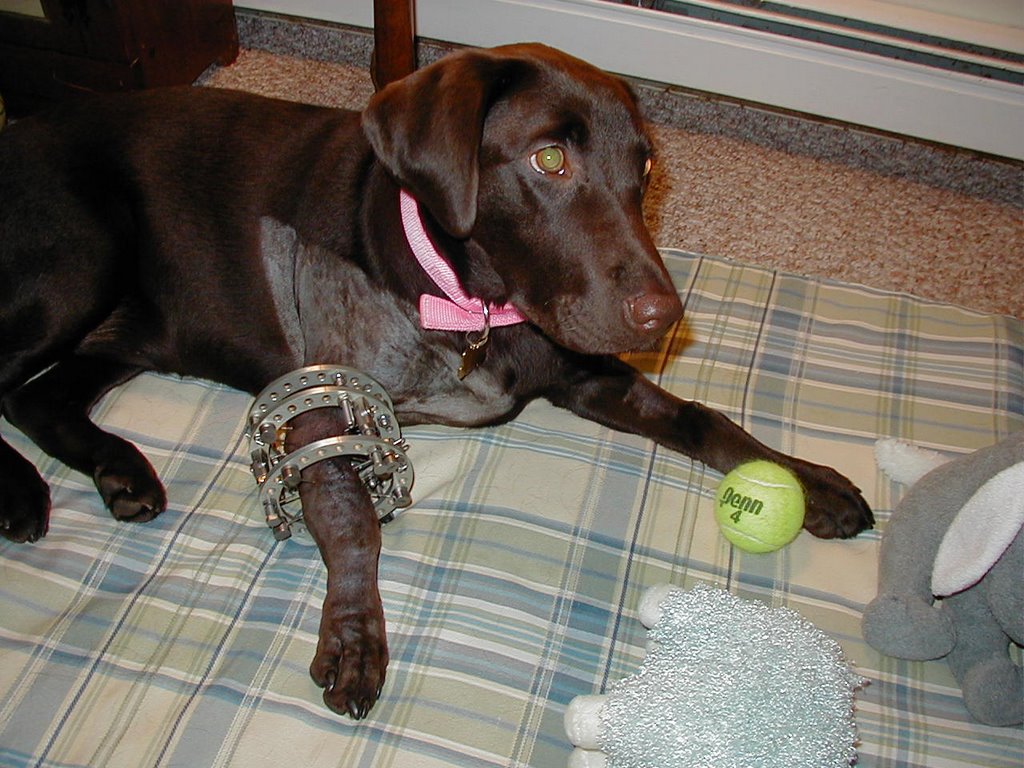 I swear to this day Mrs. Author slipped me something, but the picture doesn’t lie – surgery it was. For many weeks Truffles has not gone in or out without my having to carry her. The rest of her time is spent in an exercise pen (better than a crate) with Mrs. Author fussing over her, or in an exercise pen at the office with me doing the fussing. The dog has it made.

Not to say that she has not suffered: she has. She had the metal removed from her leg a week ago, replaced with a soft cast that was supposed to last a week. Truffles ate her way to her toes two days after it was fitted, and off it came. Pain is evident in her every move, despite medication. But she remains happy, a wagging bundle of joy, still wondrous with youth. 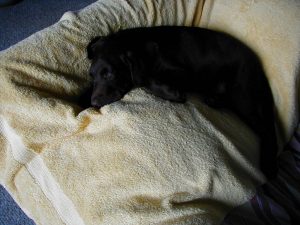 In the struggle, life continues to amuse. I wasn’t down with the name selection, so Truffles also answers to another name: FudgePants. Well why not? She looks like she’s wearing a pair. For the first few weeks she was here, the dog had to crap her pants every other hour. The causal observer might think our yard was paid a visit by Willie Wonka. After a few days of baking sun I would be forced to labor for hours in the yard with a golf club, taking careful aim for the neighbor’s lawn. Fortunately FudgePants slowed her system down by swallowing the foot of her soft cast, not bringing it back up to show us for a couple of days.

Our surgeon has been terrific. He and his staff have helped us through this in every way possible. One thing I did find odd – prior to surgery the doctor mentioned to me no fewer than than three times that I would be sent home with a special surgical wrench. It was to be used twice daily to turn screws on the leg brace first to align, then to stretch the leg. That made sense to me. What did not were the stern warnings to “Never, ever lose that wrench.” 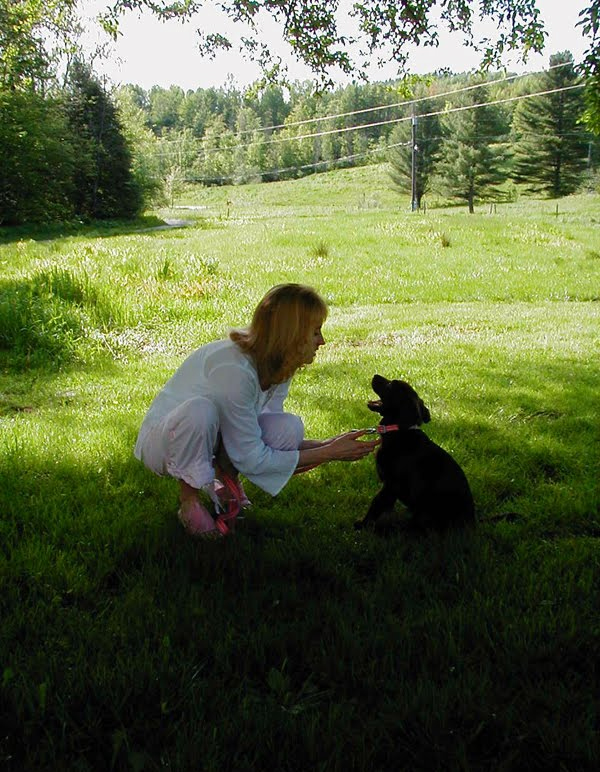 Such was his concern that the second time it was discussed I asked what it might cost if one were to lose such a wrench. The surgeon’s demeanor darkened, his gaze resolute. “That” he uttered, “would be a very bad idea. You’re probably looking at two hundred dollars!”

Two hundred dollars? Our total expenditure for Fudge Pants and the leg is likely to be twenty or thirty times that amount. I decided to drop the wrench issue. After surgery the good doctor asked me to be careful not to lose the wrench as he handed it to me. I loudly asked (loud enough for all in the building to hear) if the doctor might have some unusual emotional attachment to this special wrench. Perhaps his first girlfriend had given it to him?

“NO” he snapped. “She did not, and I don’t have any emotional attachment to that stupid wrench. Just don’t lose it.” We did not. The bolts were turned each day, an experience I don’t hope to ever repeat. Truffles grit her teeth and healed, growing before our eyes. Nigel and Sola watched her with concern, being careful not to get too close.

Days before the return of the wrench (and follow up surgery to take the rods out of Truffles leg) I snapped a picture of the wrench. The morning of our appointment I sent the following e-mail to the surgeon’s office:

The picture should be self explanatory. A briefcase full of small unmarked bills and a helicopter to a small airfield will suffice.

One might imagine my shock hours later when the following reply reached my inbox as I nervously awaited a FudgePants status call from Mrs. Author:


Do you care to negotiate? We have your Truffles “trussed up” so it is impossible for her to escape. We have blindfolded her as well so she cannot see who has taken her hostage. If she were to see us… well, you know what we would have to do. I must say her handwriting is pretty good and she made good use of the one piece of paper we gave her. DO NOT call the police!! We have your telephone line bugged. All those unmarked bills that were sent to you this morning – you can send them to us. As for the helicopter, we think we will keep that as well to aid in our escape. Time is short. Call while there is still time. 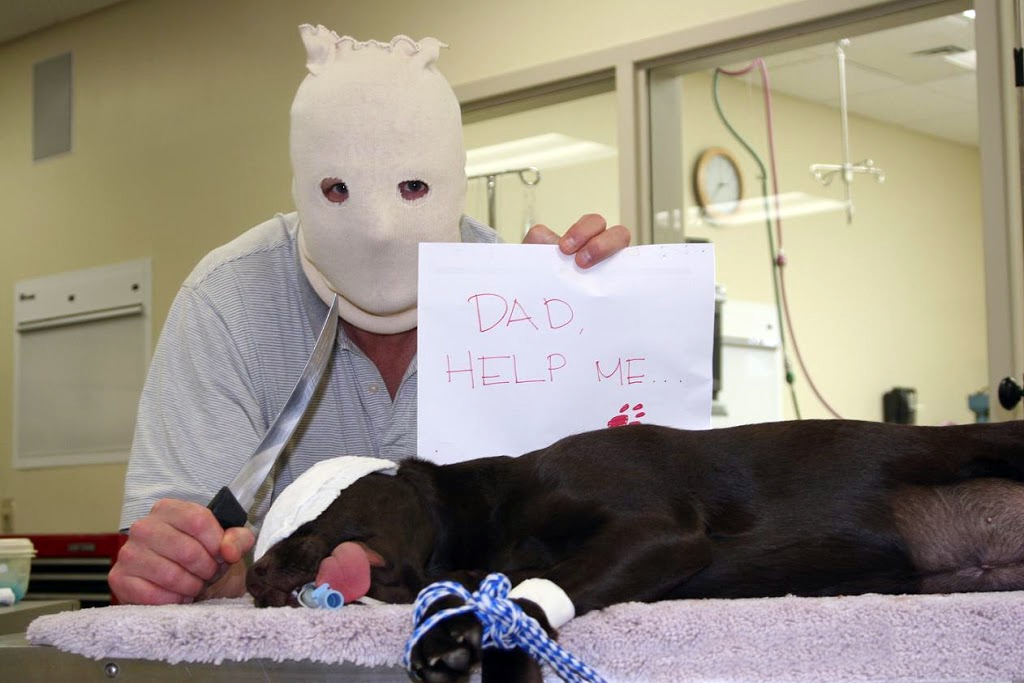 There was Pants, knocked out and tied up, her leg finally free. The phone rang. Mrs. Author told me to meet her at the vet’s office to pick up our patient. I drove like a madman and rushed in to the waiting room to find her and the staff laughing wildly about our e-mail exchange. “You!” she exclaimed, “You have corrupted another office!”

That’s fine with me. There is more than enough time to be serious in this life. It’s the fun that counts.