I suck at dog training. I frequently see training videos that demonstrate remarkable transformations in dogs with behavioral issues and am dumbfounded. Those with the skills to properly assess and correct such issues have my utmost respect. Heck, I’ll even admit that I’m jealous. Because I lack said skills, I am destined to languish among moderately well behaved dogs due to my inability to be firm with consistency.

Case in point – a crowd favorite, your buddy and mine; Nigel. He is kind, gentle, and generally eager to please. Unfortunately (begin dramatic voice) Nigel has a dirty secret.

In short, he is a carpet crapper.

It takes merely a loud clap to spook him, so training him not to counter surf was easy. He never snacks on furniture (as did Sola) or bullies the ladies. He loves everyone in a big way, and we cherish him. Yet for more than a year, Mrs. Author would arrive home from running errands to find a most unfortunate gift, given in the most fresh and warm way possible. A real stink bomb.

Every attempt to discourage such behavior failed miserably. I clapped many times, stomped my feet; threw loud tantrums and scared him silly. It was all for naught. For no apparent reason, Nigel preferred to take care of business in the house. We could have walked him to Alaska and back and he’d hold out. Profanities were uttered out of sheer frustration, knowing that no matter how hard we tried, how far we walked, how much we begged, he was going to bomb the carpet.

There is a faint silver lining in this literal cloud of a story. He chose the mat by the front door as his target. There was an unsavory lesson to be learned as we embarked on this journey – opening the door on the way in took a perfect slice off the top and smeared it across the carpet like so much frosting, a perfect patch of rancid refuse waiting for the shoe to drop. The first couple of times it did.

For a year we were locked in this poop pattern, and there was much applause in the house. I resigned myself to the fact that I would have to give up my dream of wiring every appliance in the house with The Clapper. In retrospect, it was this crushing blow that sent me over the edge.

As I watched TV one evening, a disturbing scene played out before me. Nigel quietly made his way to the door and assumed the position while I sat there stunned. He must not have cared for the weather forecast on TV, and thus decided it appropriate to create his own brown clouds. I went bonkers. All of the rules had changed – Nigel no longer cared to muster the energy to hide it. 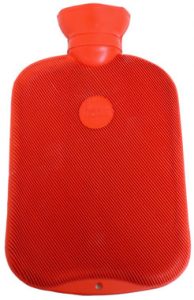 I fumed as I bagged his bounty, hands bruised from months of clapping, olfactory senses ablaze. Nigel eyed me with amusement. I rose, molten bag in tow, and took a step toward the kitchen. As Nigel relaxed I paused briefly, positioned the bag approximately six inches above his head, took aim and….by the time Nigel realized what had happened I had resumed my walk to the kitchen and was ten feet away. He bemoaned my lack of restraint: I reveled in it. Truffles and Sola averted their eyes…

Nigel: I am scarred for life. A chocolate hot water bottle deposited squarely on my noggin – the utter indignity.

Author: Actually, you just stood there and let it lazily roll off your head. Your eyes however, were the size of my head.

Nigel: Fine, you made your point.

Author: And I did. Oddly enough, Nigel never had an accident in the house again.

Now before all of you start complaining to me telling me I should not have written about this, that I should have found another way – understand that I am not advocating making turd hats for your dog if you have the same problem.

I simply had a profound need to share the fact that Nigel is just strange enough to have required it.