All are wrong. A quick trip around the internet returns many tales of dogs stalking televisions, barking; getting ticked about something they see. Sola is no exception, although her ability to identify and verbally assault TV critters was not immediately known to us. Her first few months were more furniture, wall and carpet focused. But have no doubt about it, she’s a fervent viewer.

We first learned of these talents on a quiet, lazy Sunday. Nigel was passed out on the couch with Mrs. Author as I clicked away on my laptop, burning my way through a mountain of e-mail from work. Pausing, I reached for my coffee and changed the TV channel. A simple act, one we have all committed countless times with little regard.

The air literally exploded in a cacophony of noise, Sola wailing with her hackles reaching for the sky, the television locked in a death gaze; her fiery breath warming the room perceptibly. Nigel and Mrs. Author found themselves launched from the couch by this wall of noise and hot breath and fur – landing somewhere near the kitchen, deafened and spattered in drool.

Nigel: I’ll never forget that moment. The headache is with me to this day.

Author: That did make a lasting impression. I tossed my laptop aside, coffee spilling in to the remote as I attempted to ascertain the source of Sola’s distress. She ran at the television, screaming and fussing.

It was a dog. She sees them all (but only dogs – nothing else has ever elicited a response). With the passing of years we have observed and learned, eventually coming to the realization that dog movies, Animal Planet, dog shows – all were now off limits unless the family was properly equipped with ear muffs prior to engagement. Sola despises canines delivered to our home via airwaves, satellite or cable: She does not discriminate.

One must imagine our surprise when a few weeks ago, the family settled in front of the TV bellies full from dinner, selecting an animal free program only to hear –

Nigel: What the bejesus was tha-

Truffles: I came to this party late, the rest of you should have warned me. You have lived with her for years after all.

Author: Sorry Fudgepants, this one came as a complete surprise. Having passed hundreds of evenings with Sola in front of the television I was not prepared for what I witnessed. There in front of the TV – standing upright for a closer good look, howling with total abandon, was Sola in full-on TV dog attack mode. As the rest of us gathered our wits and replaced our underwear I looked up at the screen to see what was to blame for this latest outbreak of Sola rage.

Author: I’m struggling for an explanation this one, so I’ll just say it: Sola was barking at Celine Dion while she sang at the Grammy nomination concert.

Nigel: Come on, she might be a little horsey…then again, I’m partial to the long face thing.

Truffles: Then how do you explain it?

Author: I really cannot. She seems a lovely person, and has an amazing voice.

Nigel: Those legs aren’t too bad either, they kind of remind me of…me.

Author: All of you knock it off. I know Sola is losing it, but Celine Dion is not a dog!

Author: Sola has never been the same. If I leave the radio on and Celine comes on, she rises again to her back legs, eyes glazed over in a death stare, and stumbles around in a zombie trance.

Nigel: Creeps me right out. 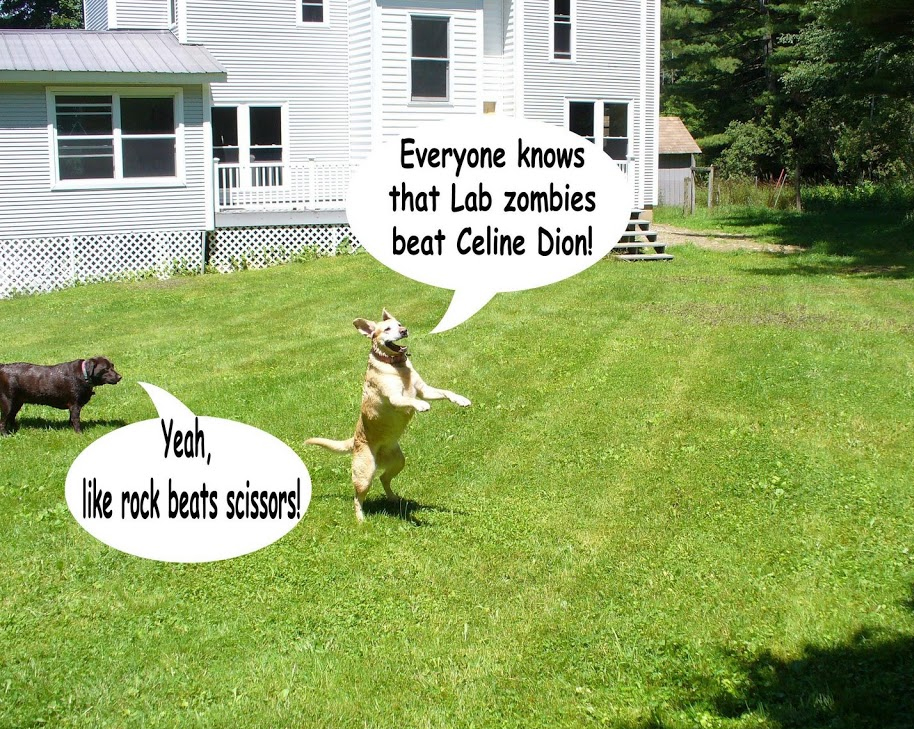 Author: I think we had better stop here. Sola is agitated again, the TV is off; the Grammys are almost a month away, and we have the radio turned way down.