What does the word hero mean to you? Do you picture a caped crusader?
A knight in shining armor? Perhaps a 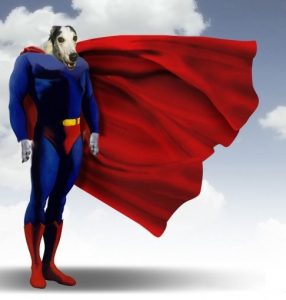 sports star? No matter your definition, the word alone is enough to conjure up a variety of strong responses from each of us. We love our heroes, idolize them, strive to be like them. Heroes inspire us, and influence our actions.

We build our heroes up to be more than they are. It is better to believe them infallible than to acknowledge that just like us, they are human. We need our idols. The inherent danger in this practice is apparent when a weakness is identified in someone who has been labeled a hero – the media and the insecure masses love to jump in and see them torn down.

This explains the “manufacture” of heroes. As stories age, the passage of time allows for omission of fact and embellishment beyond reason. This cocktail makes for the perfect hero – one who is so far from reality that we must put our faith in the story and believe all that we are told. Additionally, mass media is under constant pressure to go bigger and better, to get that giant scoop – and “find” heroes to bring back to their respective viewers, or readers.

If you are anything like me, the cynic in you sees through these sleights of hand, and after a while, it is impossible not to question the assignment of the label. After all, have we not seen the fall of many modern day heroes? I am sure that Michael Vick was a hero to some just a few years ago. Any takers now? I think not.

None of this could have been further from my mind last Saturday as I prepared myself for one of my least favorite weekend chores: the dump run. Our urban and suburban friends enjoy the convenience of curbside trash pickup. We are not so fortunate. Our rural location makes pickup prohibitively expensive, and having just bought our home in October, we continue to work our way through projects that produce refuse too large for trash cans. So every other Saturday, I finish my coffee, give the dogs a scratch and shuffle to the garage, feeling a familiar sense of dread come flooding back in.

I would rather be anywhere this morning. The sun has made a rare appearance, the strength of it warming me to the core. From the other side of the house, just beyond my sight, the river babbles, calling me to abort my mission and soak away my troubles. The dogs stalk me from the house: faces pressed to glass with the hope that I will break all of my promises to responsibility and just take them out for a swim. They encourage me to walk the path of least resistance, for which I require no map.

I open our SUV and start collecting my payload, making my way to the shed that holds our recyclables as my pulse quickens. Sweaty palms slip on plastic as I struggle to lift heavily laden trash bags in to the the back of the truck before locking up for the trip. I back out of the driveway and take a deep breath, steadying my nerves; careful not to back in to oncoming traffic, my view blocked by the bags surrounding me. In a matter of minutes I arrive at my destination, the seven miles that separate us from the local landfill disappearing in a blink. 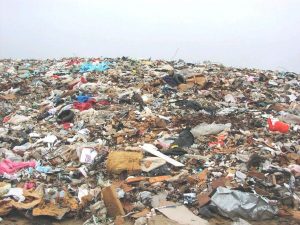 Today, like many Saturdays before this one, I will face an antihero of sorts: the Dump Cop.

Have you ever known a person who can make you feel completely guilty of something, even when you have done absolutely no wrong? You know, kind of like that feeling you get when you pass a cop car doing the speed limit – and still get that heart in your throat feeling because you are convinced that no matter what, you are still going to be pulled over for something. I had a teacher with such magical powers in high school – I could be head down in an assignment, minding my own business when said teacher would walk by and give me that look – the look that says I know you are not doing anything wrong, but if and when you do, I will always be here to call you out. I would blush under the pressure of her stare, cursing her under my breath for making me feel guilty of… nothing in particular.

Dump Cop possesses the same power. And she knows it.

As I pull the truck close to the booth at the entrance of the landfill, I see Dump Cop go to work on the patron ahead of me. Dump Cop has two important jobs: intake, and supervision of disposal. The intake process consists of the following. Unsuspecting driver pulls up to booth. Dump Cop leans out of booth, exposing a giraffe-like neck as she barks questions, her head nearly circling the car as it helicopters, eyes scanning the contents of the vehicle. “Is that a regular kitchen bag or a leaf bag? You know, a leaf bag costs a dollar more. Are you sure that’s not a leaf bag?” Before the driver can respond, the questioning continues. “Is that a foil lid I see still attached to that yogurt cup?!? Unacceptable recycling practice. Please pull the vehicle aside for inspection.”

I note the fear in the eyes of the driver before me as he pulls over to the holding area for what promises to be an unpleasant inspection. I have never seen the Dump Cop pull a cavity search; but this morning she seems very much invested in her work, and I consider that there is a first time for everything when I realize that the gods of fortune are smiling on me. As I clench the wheel and approach the booth of scrutinization, I am spared as Dump Cop is relieved by one of her counterparts. She departs hastily, clearly excited to get back to work on disposal patrol. 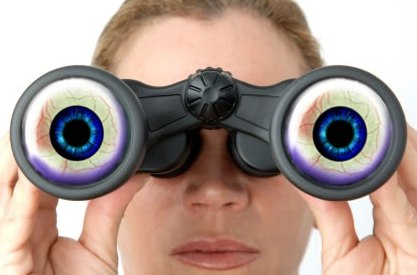 Once I have paid my way the real challenge presents itself. I speak positive words of encouragement to myself under my breath as I pull forward and enter the dragon’s lair. It is not long before I spot her. In what is the best henpecking pose I have seen to date, Dump Cop is perched on a platform high above the two main dumpsters, hands on hips, neck extended, binoculars dangling crazily from it. She’s working the crowd hard, her voice easily carrying across the parking lot, ringing in my head. “For the love of Pete, don’t you people know your trash rules?!? Maybe I should go to your house and put your socks in your underwear drawer!” A frenzy of activity follows every crack of the vocal whip.

This constant abuse does have an upside. People haul ass through the dump while she administers punishment. Lines are rare. It is not uncommon to see folks changing in to running shoes just before they enter, using the fence to stretch their legs as they ready themselves for a short and painful sprint. On this morning the crowd is energized, weaving madly through the parking lot, desperate to unload their unwanted goods without suffering interrogation, or even worse – apprehension. I look for an opening as I shoulder a bag of trash, Dump Cop bellowing orders to the patron on my left. “Does that look like household trash to you? Well, does it?? Don’t just stand there with your mouth open, find your way to the metals bin and dispose of your trash properly.”

I take a step forward, fully prepared to feel her wrath. Just as I cringe and wait for her to tear in to me, Dump Cop is distracted. I see her eyes darken as that impossibly long neck whips around to focus on another customer, and that is fine with me. I do not hesitate to hurl the remaining trash that I carry in to the confines of the compactor with a giant sigh of relief. I am not in the clear – I still have recyclables in my possession, and recycling is Dump Cop’s passion. I keep this in mind as I grab another bag and drag it behind me, inching up to the corner of the truck for a peek.

I should have bought a lottery ticket that day. Luck was on my side again. I realized that Dump Cop already had a perpetrator in her clutches. I lowered myself like a hunting dog, inching closer to the dumpster that would free me once I had made an offering. Dump Cop tore in to the perp. “See that bag? That bag has a waxed liner. Waxed liners are not recyclable, they are trash and you have to pay for trash. Now get that bag away from my recycling!”

I did not question my luck as she went up one side of this poor patron, but I froze as she went down the other, my bag of cans and wrappers falling to the ground, spilling at my feet. He had turned to take the walk of shame from the recycling dumpster to the trash compactor, after offering a humble “Yes ma’am.” I had to blink a couple of times in order to believe that the person in the clutches of the dragon was none other than a hero of recent fame, Captain Richard Phillips of the Maersk Alabama. 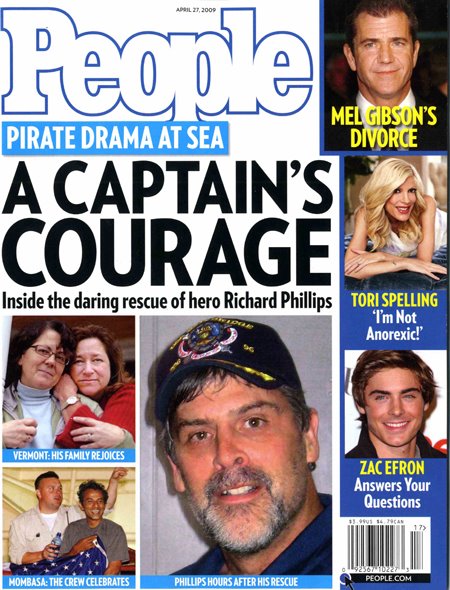 That’s right, the same Richard Phillips who had survived giving up his ship at gunpoint, and spent days in a lifeboat as a pirate hostage, only to reach freedom by narrowly escaping a few very well placed sniper rounds. This brave and humble man was taking one for the team. All of us non-heroes were enjoying a mini-vacation at his expense, merely walking with our trash, stopping to ask those around us if they could use a hand. The usual, frenetic pace had slowed to a near standstill, cars backing up at the gate. I could not comprehend what I had witnessed. As Dump Cop squawked one last “you should know better” at the captain, I actually ducked slightly, expecting to hear the crack of a sniper rifle. Sadly, all was silent.

One thing was crystal clear. The hero label fit. Not only had Richard Phillips survived an exotic, nearly unimaginable danger in a far away land. He had stood toe to toe with the Dump Cop, and he was not shaken. His humility never broke under the weight of anger as a small minded person from a small town got in his space and made a big deal about nothing. He did not mention his name, protest in any way, or even throw out the tried and true “Do you know who I am?” 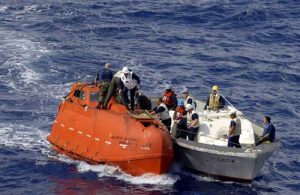 I let all of this sink in for a minute while I chastised myself for leaving my camera sitting in a drawer in the kitchen. I had escaped the Dump Cop without assault or scrutiny. I had seen a real hero in action. If only I had captured the moment in pictures. None of this was lost on me as I watched Richard Philips reach up to the dumpster to rid himself of the one piece of trash that had cost him dearly that Saturday: an empty dog food bag.

Some heroes seem larger than life; some smaller. Some heroes are made, and some are manufactured. And some heroes just are. Richard Phillips is the real deal.

As for Dump Cop, some things will never change. She remains parked atop her perch, passionately lashing out at fools with food stuck to their jelly jars. I desperately want to take her picture. I want to tell her this story, and beg her to take a walk on the lighter side. Oh yes, I could do that. And for the rest of time, every other Saturday, Dump Cop would be all over my junk.